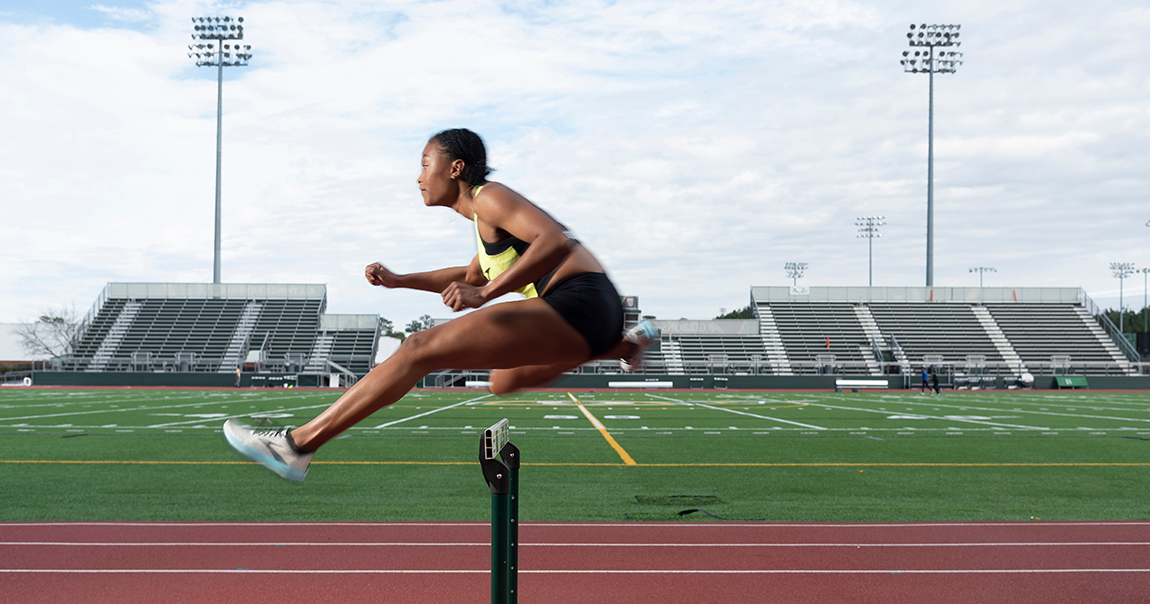 Most young athletes would expect spinal surgery to be a career-ender, dashing their hopes for long-term competitiveness in most sports. But that doesn’t have to be true.

Thanks to the pediatric spine specialists at Duke Children’s, two young athletes were able to overcome severe scoliosis and get back in the competition. Taylor McKinnon, a high school hurdler, and Liza Murtagh, a collegiate swimmer, persevered through difficult surgeries and recoveries. They not only regained, but exceeded, the athletic heights they had achieved before they underwent their difficult surgeries. Both are now pursuing their athletic and academic goals. 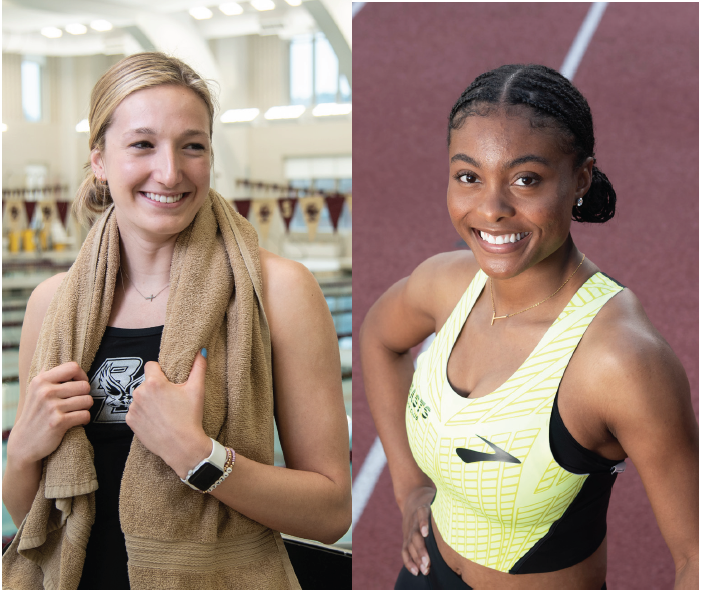 Scoliosis is an abnormal curvature of the spine usually diagnosed during childhood or early adolescence. It affects six to nine million Americans, according to the American Association of Neurological Surgeons. Although mild scoliosis usually is not serious, problems with posture, pain, or respiratory issues can develop over time if untreated. Early intervention is key because scoliosis may get worse as children grow.

Duke pediatric spine specialists offer the full range of nonsurgical options such as casting (for younger children and infants), bracing, and specialized physical therapy, as well as advanced spine surgeries and procedures. Treatment recommendations are tailored to each child’s unique anatomy and needs.

Taylor McKinnon, of Durham, began running competitively at a young age. When she was diagnosed with scoliosis as an 8-year-old, she hoped the hours spent wearing a thoracic brace— which she nicknamed “The Horrible”—would straighten the curve in her back.

Though Taylor wore the brace nearly 23 hours a day, even sleeping in it, her curve continued to progress. At age 13, the summer before her freshman year in high school, Taylor underwent spinal fusion surgery to correct the curve.

By the time of Taylor’s surgery, the curve in her thoracic spine had progressed to nearly 60 degrees. Though concerned that her daughter would have to undergo back surgery, Taylor’s mom, Shawna McKinnon, says her main concern was how it would impact her running ability and her quality of life, especially her ability to bear a child in the future.

“Taylor absolutely loves to run, and she has been successful at it,” Shawna McKinnon says. “We wanted to ensure that for as long as she wanted, she would still be able to run.” 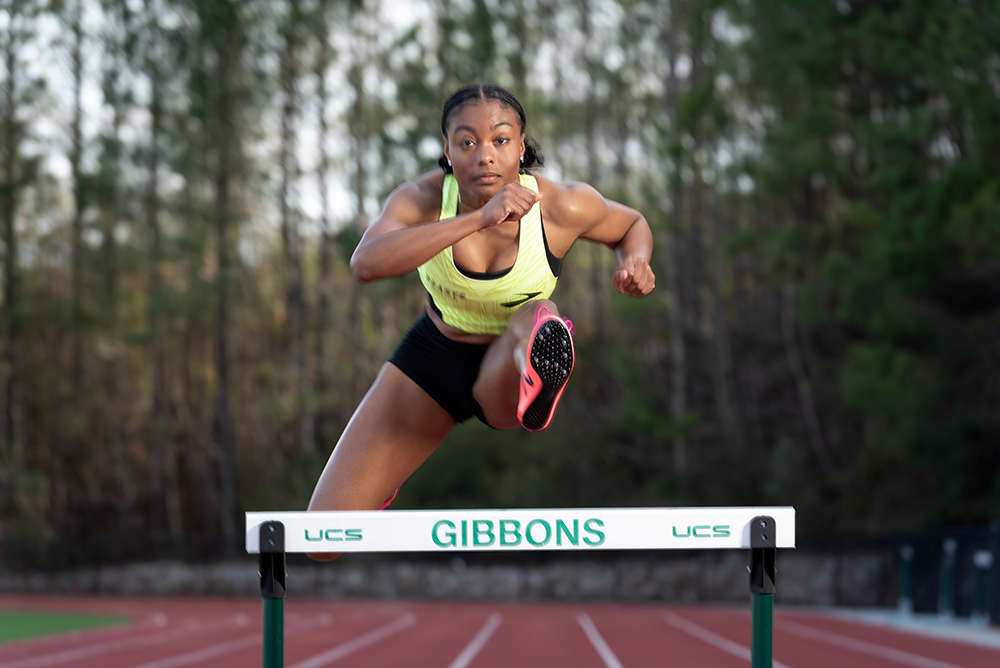 "Dr. Lark took the time to look at how a hurdler jumps and runs, and what muscles they use. He took time to understand her goals and her dreams of running in college or in the Olympics someday."

A nine-time state high school swimming champion who began swimming competitively at a young age, Liza Murtagh was diagnosed at age 13 with scoliosis. Though her family knew she’d likely need surgery, they wanted to try other treatments first. The family lived in Wilmington and their pediatrician initially referred them to a scoliosis clinic in Raleigh. When that clinic proved to not be the right fit, her mother, Jean Murtagh, did additional research, and ultimately found Robert Lark, MD, MS, professor of orthopaedic surgery at Duke. After meeting him and his team, the family knew they had found the right place for Liza’s care and began to regularly make the long drive from Wilmington to Durham.

“We felt so lucky that we had found a physician who listened,” Murtagh says. “Aside from Dr. Lark’s experience and skills, he invests time and care in each individual patient to determine the right surgical plan.” Lark told Liza and her family that she would need surgery but wanted to wait until Liza was ready.

Swimming was an enormous part of Liza’s life and losing that was unthinkable. Murtagh says that Dr. Lark never pushed Liza into surgery until she was prepared and ensured that Liza remained an active part of her treatment process and the decisions around it.

After bracing for nearly two years, Liza’s curve continued progressing to over 50 degrees. It was time and, more importantly, Liza was ready to consider surgical options. 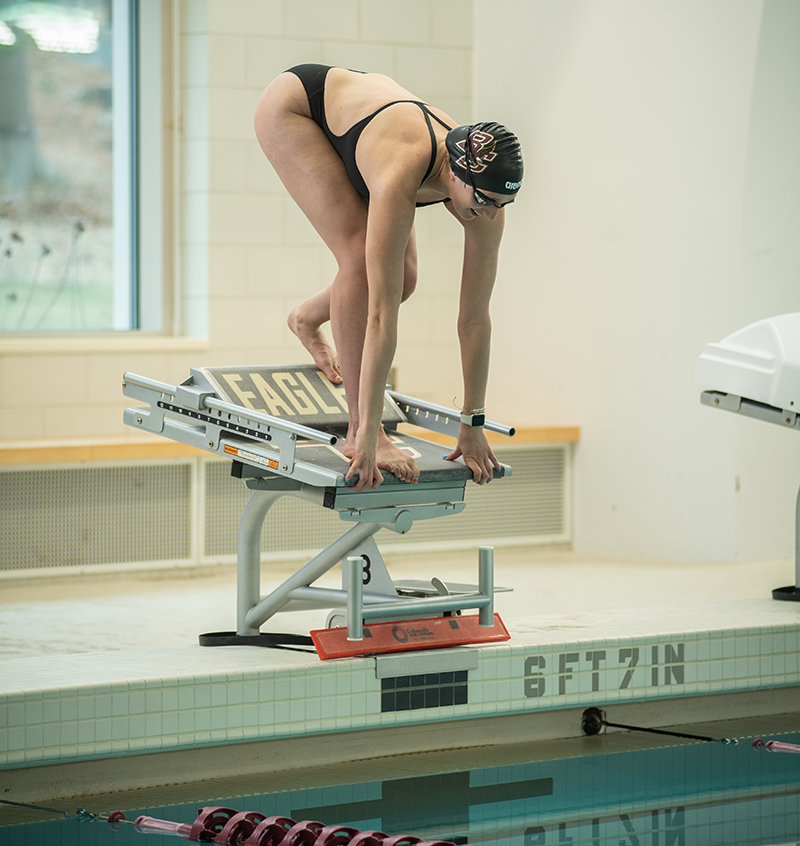 Lark performed Taylor’s and Liza’s surgeries. Taylor underwent posterior spinal fusion surgery in June 2017. This procedure involves correcting and stabilizing the spine with rods and screws. Next, surgeons fuse together the vertebrae to prevent the curve from progressing. Taylor’s spine was accessed from her back, called a posterior approach.

“All of our vertebrae have four separate joints,” explains Lark. “When you do a fusion, you lose the mobility of those vertebra. That’s scary for people, especially people who are as active as Taylor. They think they’re not going to be able to get back to doing sports or dancing or other activities that we assume require a lot of spine mobility. Taylor’s a good testament that some of those myths aren’t necessarily true. With proper surgical technique and recovery, kids can get back to doing what they love.”

Liza’s surgery was performed in June 2019. She had an anterior spinal fusion, which involves accessing the spine from the front of the body—behind the abdomen or chest wall.

“We didn’t want to disrupt the muscles in her back because she needed those for the breaststroke and other swim strokes,” Lark says. “This approach helps preserve mobility in her upper back, shoulders, and hips.”

Murtagh recalls that right before Liza went into surgery, Lark asked her if she wanted to be perfectly straight or should he try to preserve mobility. Without any hesitation, Liza requested that her mobility be preserved. Though the original surgical plan for Liza involved six vertebrae, Lark was able to straighten her curve and preserve mobility by fusing only four vertebrae.

Duke’s pediatric spinal specialists will work with each family to find the best treatment option for their needs. For Taylor and Liza, spinal fusion surgery was the best option. These before-and-after radiographs demonstrate the curvature and correction of their spines. 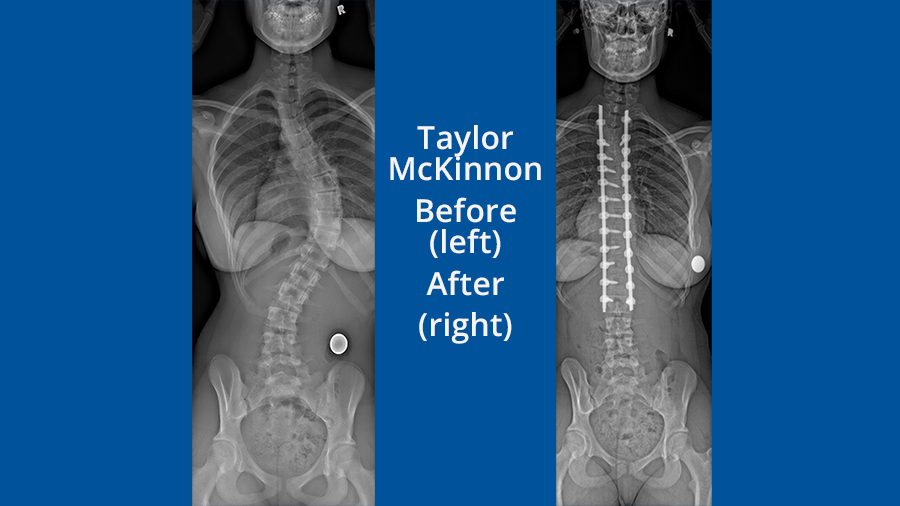 Even though Liza and Taylor both underwent spinal fusion, their surgical procedures differed based on their post-surgery mobility goals. 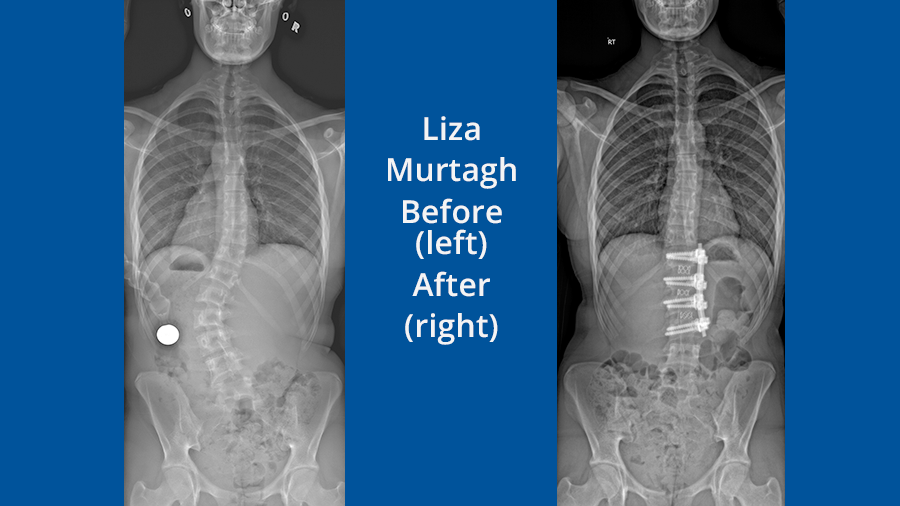 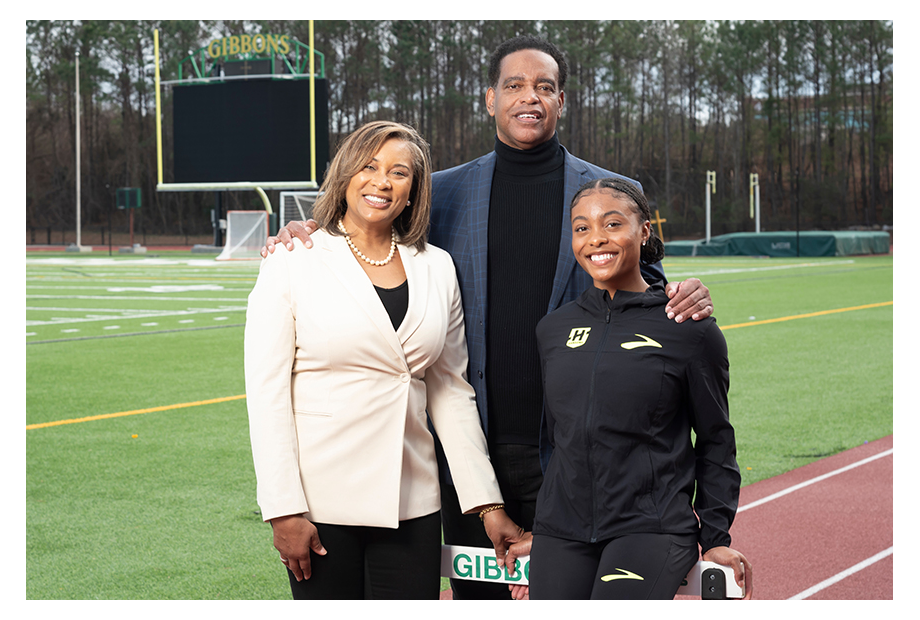 After surgery, patients stay in the hospital for a few days and then recuperate at home with limited movement for six weeks.

“The recovery piece was absolutely hard for Taylor, and it was hard for us,” Shawna McKinnon says. “But we persevered, and we did everything that Dr. Lark and the team encouraged us to do just to make sure that she healed properly. She was a true champion through it all.”

Taylor’s dad, Tim McKinnon, knew she was tough enough to get through it.

“I really felt like Taylor was in good hands,” he says. “Dr. Lark took the time to look at how a hurdler jumps and runs, and what muscles they use. He took time to understand her goals and her dreams of running in college or in the Olympics someday. And he wanted to make sure that she still could pursue those dreams.”

Nine months after her surgery, Taylor took first place in 100-meter hurdles at the North Carolina 4A State Championship.

“I was really hungry to prove to myself that I wasn’t going to have any problems after surgery,” says Taylor, now a senior at Cardinal Gibbons High School in Raleigh. “I was going to be as fast as ever. But crossing the finish line after winning that race was crazy. It was a full circle moment of just understanding that hard work and persistence really do pay off.”

Taylor will graduate from high school this spring and plans to attend Vanderbilt University where she will continue running track and field. She aspires to become a U.S. Diplomat in the Foreign Service.

“Surgery has definitely changed everything about my body, and I’m more comfortable in my own body now,” says Taylor, who won the MileSplit National Girls Performer of the Week for Indoor Track and Field in January and received the N.C. High School Athletic Association 4A Female Track & Field Sportsmanship Award last year. “It’s just opened so many doors for me.” 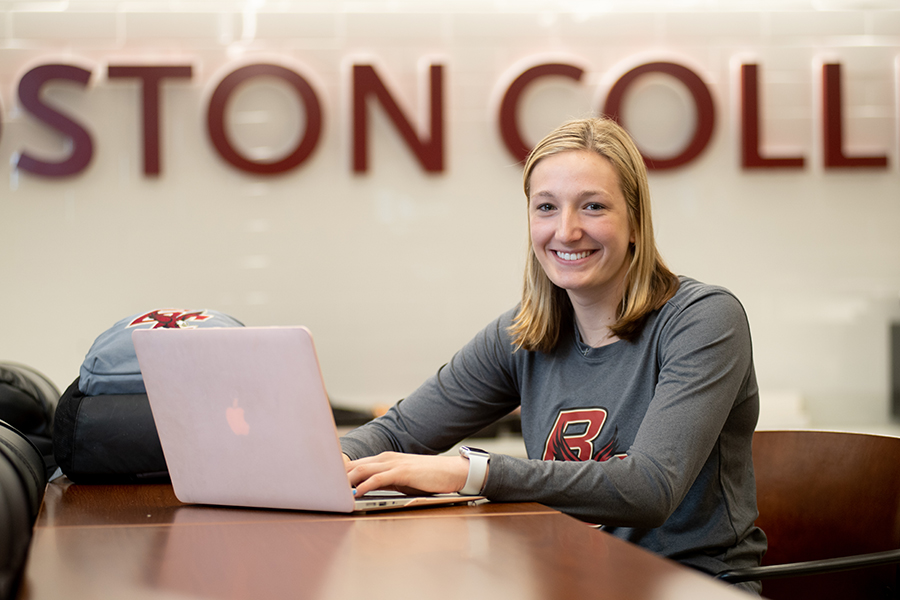 “Aside from Dr. Lark’s experience and skills, he invests time and care in each individual patient to determine the right surgical plan. Words cannot express our gratitude to Dr. Lark for his ability to listen and to look at each individual and come up with the right game plan for them. ” 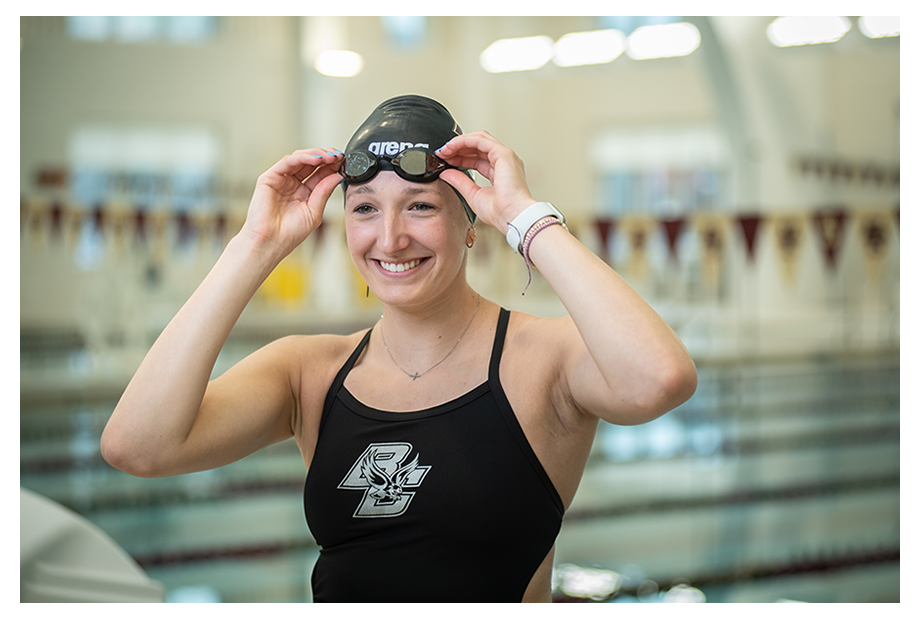 Liza was given strict postoperative recovery orders: no swimming, only walking for three months. Once she was cleared to swim, she still had to limit her stroke styles and what maneuvers she could do in the pool. Liza’s goal from the time she scheduled the surgery was to be able to fully participate in her club and high school swim seasons. Thanks to the surgery, the guidance from Lark’s team, and to Liza’s work in the pool, she achieved that goal and so much more.

Now a freshman at Boston College, Liza competes in the Atlantic Coast Conference and made the school’s Top 10 All-Time Performers list in swimming. Liza had to undergo an additional sports medicine physical to be cleared for competition; the physician at Boston College said that hers was the best post-fusion mobility he had ever seen. After college, Liza plans to become a pediatric dentist.

“Dr. Lark is so good about getting to know his patients and learning about us personally. He learns about your family and your goals to decide what’s going to best suit you,” says Liza, who was the 2021 NCISSA Division II State Champion in the 100 Breast and 200 Individual Medley competitions and anchored both winning 200 and 400 free-relay teams. “When we were at Duke, all the nurses provided such a calming presence and were so supportive. The whole team just made it so much easier to recover.”

“We found the surgeon who saw that Liza’s scoliosis was more a bump in the road, not the end of her journey, but a part of it,” her mother adds. “Words cannot express our gratitude to Dr. Lark for his ability to listen and to look at each individual and come up with the right game plan for them. We appreciate his efforts and willingness to help Liza get back to competing at a high level.”

When we were at Duke, all the nurses provided such a calming presence and were so supportive. The whole team just made it so much easier to recover.