From hopelessness to hope Brayden was near death when he was born. Now, he is a joyful six-year-old  with a love of people and for life. How Brayden's journey went from one of  hopelessness to one of great hope is nothing short of astonishing.

When Brayden’s mother, Erin, went to a routine 34-week pregnancy check-up, she anticipated a normal visit. However, the doctor had some concerns about Brayden’s prenatal development, and scheduled a follow-up ultrasound. A few days later, at her ultrasound, the attending physician told Erin that she needed to go to the hospital immediately. Something was seriously wrong with Brayden.

Erin and Brayden’s father, Jeremy, went to the closest hospital: Johnston Memorial Hospital, about an hour from Duke. There, Erin was started on monitors and IVs. Physicians told her that, because she was high risk, she couldn’t tolerate an hour’s drive to Duke, and that an emergency C-section would be performed.

Brayden was born a few hours later and was immediately taken from the operating room to the nursery. After several anxious hours, his parents were told that Brayden was seriously ill and that Duke Life Flight was on the way.

Brayden’s parents got to meet him briefly before he was sent to Duke Children’s via Life Flight, with Erin following in an ambulance. Later that night, a Duke Children’s Intensive Care Nursery (ICN) physician met with Erin and Jeremy to tell them the devastating news: not only was Brayden premature at 34 weeks, but he had hydrops and a number of other medical issues. Hydrops is a fetal condition that causes an accumulation of fluid in the body, and Brayden was severely presenting this symptom. Hydrops is so rare that Brayden was only
the second child at Duke Children’s to ever be diagnosed with it. To this day,  his family still doesn’t know what caused it.

The number of preemie diapers used by the Duke Children's Intensive Care Nursery in one year.

The number of bed cribs in the Duke Children's Intensive Care Nursery. The nursery is typically full at all times.

Brayden spent his first weeks in the Duke Children’s ICN, many of those on diuretics to help rid his body of the fluid. Since Erin and Jeremy lived an hour away from Duke Children’s they stayed in a hotel in Durham for the entirety of Brayden’s time at the ICN; his older brother, Bryce, stayed with family and visited on weekends. Erin and Jeremy spent every waking hour at the hospital, growing incredibly close to Brayden’s care team. They especially appreciated  being there every day for rounds and feeling like they were an integral part of Brayden’s healing process. Brayden was released from Duke Children’s after 37 days with no need for medical devices.

Today, Brayden is a gregarious and friendly kindergartner. His family and doctors were never sure if he would walk or talk, but now he does both—and he loves talking with strangers and making new friends. He has some developmental delays as a result of his experience and so regularly sees physical and speech therapists; he was also diagnosed with cerebral palsy when he was two years old, which presents as a weakness on his right side. However, Brayden doesn’t let any of this slow him down: he plays t-ball and loves basketball, soccer, and baseball.

Brayden no longer visits Duke Children’s and only has regular check-ups with his local pediatrician, but Erin remains in touch with his medical team and keeps them up to date on Brayden’s progress. She knows that her son has a full and flourishing life thanks to Duke Children’s, but Duke Children’s needs your help to ensure that babies like Brayden get the treatment they need to survive unimaginable odds. Your gift saves lives. Thank you for giving hope to families in their time of greatest need. 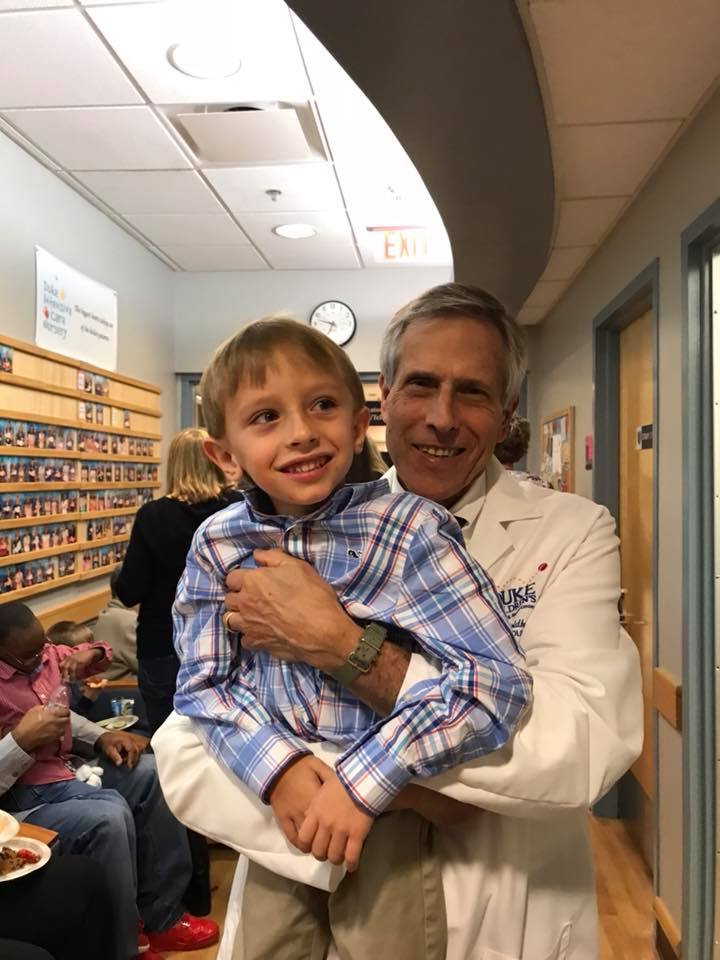