SHOWING OTHER FAMILIES THERE IS HOPE

A routine visit to the pediatrician proved anything but when Eve’s doctor felt a lump in her abdomen. An ultrasound revealed masses in her kidneys. Her stunned parents were told to visit a pediatric oncologist immediately. Her pediatrician recommended Duke Children’s, as his own son had been treated there during a cancer scare. 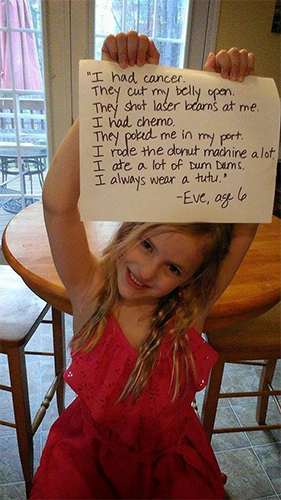 Eve was admitted in October 2009. Tests revealed that she had Wilms’ tumor, a rare kidney cancer that primarily affects children. Even more unusual was that both of Eve’s kidneys were affected.

"The day of Eve's diagnosis was the worst day of my life. Hearing the word ‘cancer’ in the same sentence as your child is jarring. Every day after that was better because Duke had a plan,” says Eve’s mother, Christy.

The physicians at Duke Children’s started Eve on an aggressive chemotherapy regimen. One of her mother’s saddest memories from this time was having to use gloves to change Eve’s diapers because the treatment made her urine so toxic. 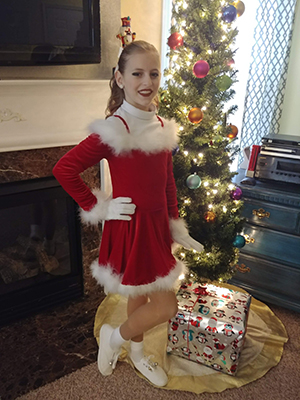 It was during this period that Eve’s family experienced what makes Duke Children’s so special. The nurses brought Eve gifts for special occasions. The oncologists were always available to answer questions. Christy says, “This was the most comforting thing we experienced.”

Eve and her family never lost their sense of humor. After being discharged from inpatient treatment, Eve started wearing tutus to every follow-up appointment. And when her chemotherapy port was removed, her family decorated it with glitter and turned it into a Christmas ornament. Eve continued to visit Duke Children’s every three months for scans— always wearing her trademark tutu.

Six years after her diagnosis Eve was declared completely cancer free. The milestone was bittersweet: Eve and her family were elated by the news, but sad to say farewell to the staff at Duke Children’s, who had become like family.

Eve, now eleven and in the fifth grade, only has to visit the cancer survivorship clinic once a year for growth monitoring and labs. She loves to dance, math, and eating tacos—all the normal activities any healthy kid can do. Kids like her are the reason the physicians, caregivers and researchers at Duke Children’s work so tirelessly--to provide hope and healing to every family.

Because of Duke Children’s my child can show other parents that there is hope.