This ongoing fundraising initiative will combine the power and passion of Duke Men's Basketball with a highly engaging fundraising campaign to benefit Duke Children’s. The first challenge was held during the 2021-2022 season. Prior to tipoff at every men’s basketball home game during the season, a different Duke personality or celebrity guest walked out on the court with the game host, stepped up to the “charity stripe” and attempted a foul shot to help raise money for Duke Children’s. A made shot earned $1,000 and a missed shot was worth $500.

Fans who couldn't be at Cameron Indoor Stadium last season were also able to join the Charity Stripe Challenge Fan Pledge! Fans could choose a fixed amount to pledge for every free throw made by the Blue Devils during the season, or could choose to make a one time pledge to show their support. Approximately 550 free throws are made during a typical season. At the end of the season, the total pledges made a significant impact for the patients at Duke Children’s!

498 free-throws made this season 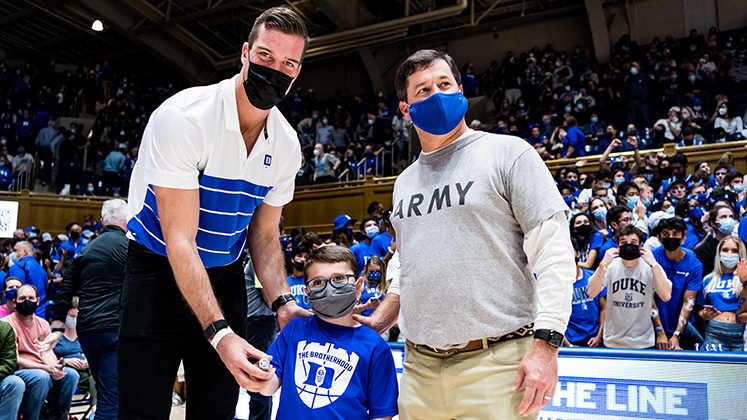 Being a Game Host includes:

*Be the host for this historic rivalry, sitting close to the action for Coach Scheyer's first match up with the Tar Heels in Cameron Indoor Stadium. Includes pre-game reception at the Washington Duke Inn.