A little heart with a strong beat, thanks to Duke Children's 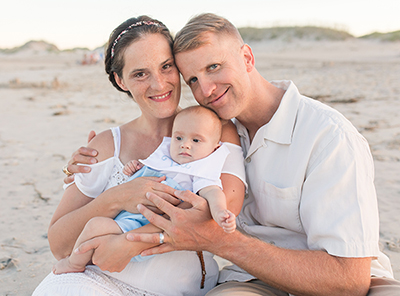 development, his parents were referred to a maternal and fetal specialist in Wilmington, a little over an hour from their home in Jacksonville, NC. Fortunately, this specialty clinic had ties to Duke, so Wilhelm’s parents were in good hands when they learned that their unborn child had serious heart issues.

“My husband and I are a tough unit but it shook us.” — Wilhelm’s mother, Julia

Wilhelm was their first child, and Julia was closely monitored during the rest of her pregnancy, regularly making the hour-long drive from her home to the clinic in Wilmington. Wilhelm’s family traveled to Durham in February of 2017 for a scheduled induction at Duke Children’s. When he was born, he was taken immediately to the Intensive Care Nursery for close observation of his heart.

The hero cape Wilhelm received while inpatient at Duke Children's.

Wilhelm and his loving parents.

Wilhelm and his new baby sister!

Wilhelm loves the outdoors, including the beach...

...and he doesn't mind the cold weather either!

Happily, Wilhelm only stayed in the Intensive Care Nursery for a few hours. Wilhelm had several holes in his heart, leaky valves, and serious defects in his aortic arch and other heart valves. It was hoped that some of the holes would close on their own. However, they did not and after many visits with his Duke Children's cardiologist, it was determined that he needed surgery. Wilhelm underwent an open heart procedure at Duke Children’s in November 2017.

Julia says that they were grateful to have the security of Duke Children's during the most stressful period they had ever experienced. Wilhelm’s parents love his amazing Duke caretakers, and are especially grateful for the gift of a superhero cape with a “W” on it which he received while he was recovering. Julia also remembers his first smile after surgery which brought with it another milestone: a glimpse of his first teeth!

Wilhelm, now two, still sees his Duke doctors regularly and may need more surgery when he is older. He is a happy and curious toddler who loves playing outside, throwing around his toy footballs and soccer balls, and exhausting his parents with his boundless energy. He also just became a big brother to his new baby sister, Lorelei, and as of January 2019 he is medication free for the first time since his surgery! With careful monitoring by his Duke Children’s team and support from his loving family, Wilhelm has a bright future ahead of him.

“In the end it made us stronger,” Julia says, “We look at Wilhelm and say... ‘How blessed we are, he is our miracle.'"