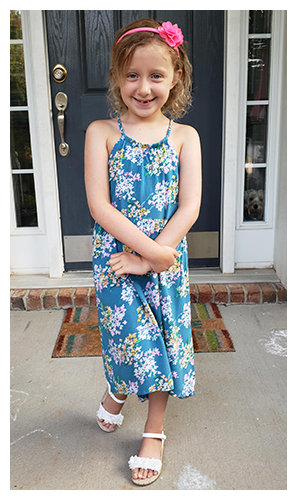 FROM THE WORST MOMENT TO HOPE

Abby’s headaches started in the summer of 2015. They were brief and intense, and by Christmas of that year she had them several times a week. Abby’s mother took her to the doctor. A series of tests led to an MRI which showed a frightening sight: a large mass in Abby’s brain. Abby was only five years old.

“When the neurologist told me Abby had a mass in her brain and that I needed to take her to an ER, I couldn't even think straight,” says Abby’s mother, Lisa. “It's the scariest, worst moment."

The neurologist told Abby’s family to go to Duke Children’s for its world-class brain tumor treatment program. Abby was immediately admitted to Duke and scheduled for brain surgery the following day. After surgery Abby was diagnosed with a supratentorial primitive neuroectodermal tumor (or sPNET), an aggressive and malignant tumor, meaning that Abby needed multiple rounds of grueling chemotherapy and radiation to get better.

Chemo and radiation aren’t easy for anyone, let alone a five-year-old little girl. Abby’s fighting spirit and the support of her parents, three siblings, and the providers at Duke Children’s kept her strong.

Abby spent many weeks hospitalized. Despite being so sick, she loved making new friends in the Duke Children’s playroom and being creative with the Arts for Life activities.

Over time Abby slowly got better. After her last chemo appointment, the Duke Children’s nurses celebrated with a parade down the hallway and surrounded her with singing and dancing when her chemo port was removed.

Because of Duke Children’s, Abby has been in remission for three years. She is a cheerful fourth grader who loves math and playing Minecraft. But her care continues. She receives follow up MRIs every six months, and she still has some focusing and memory troubles as a result of her treatment. To help other families fighting pediatric cancer, Abby and her family also started a non-profit called Abby’s Army NC that provides donations to Duke Children’s.

The people, the doctors, the level of care, and the focus and attention to the latest research make Duke Children’s so special. We are just so grateful to everyone at Duke and blessed to have Abby in remission.