GIVING TO THE GREATEST NEED

On the one hand it may seem as though David and Sandra Sprouse have little to no connection to Duke Children’s. The Anderson, South Carolina, couple has never set foot in the Children’s Health Center, and they don’t have any children of their own or relatives who need care there.

But Duke and charitable giving have occupied a special place in Sandra Sprouse’s heart for nearly all of her adult life. And in that light, her decades-long support of Duke Children’s isn’t that surprising after all.

Sandra Sprouse, who was born and raised in Durham, graduated from Duke in 1959. She majored in French and went on to become a high school French teacher in Concord, North Carolina. She was inducted into a teacher’s sorority in 1964 that raised money for another children’s hospital. Having never lost the drive to give to children’s causes, she began to give regularly to Duke Children’s each year and has never missed a year since. It wasn’t long before her husband, now a retired textile industry executive and real estate developer, was on board too.

Sandra Sprouse recalls, “When I told my husband that I wanted to do a larger gift when I died, he said, ‘Well, we’ll do it together and why not in our lifetime?’”

“We don't have any children ourselves, and we are very fortunate to be able to do this now,” David Sprouse says. 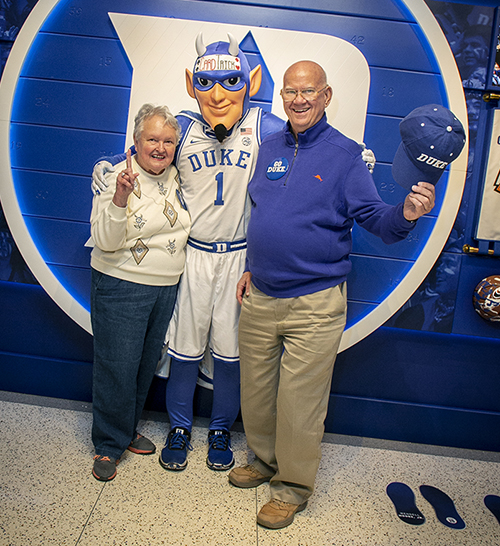 “The stories of the children at the hospital are just so heart-wrenching.They get so much help through the care and research that goes on at Duke. I think it's just marvelous.”

The Sprouses say reading patient stories in the Duke Children’s publication, Stories, and listening to patients and families share their touching experiences during a donor event last year played a key role in their decision to make a much larger gift now.

“The stories of the children at the hospital are just so heart-wrenching,” Sandra Spouse says. “They get so much help through the care and research that goes on at Duke. I think it's just marvelous.”

Together the couple created an unrestricted endowment that will support the children cared for by Duke Children’s. The chair of pediatrics will have flexibility to use this fund toward his or her top priorities, guaranteeing that this endowment will continuously support patients, physicians, and the delivery of care for years to come.

Sandra Sprouse hopes the endowment will improve lives for children, regardless of their family finances. “I hope that it will help because a lot of people don't have the money that they need to go to Duke for treatment.”

David Sprouse adds: “We've learned about the work being done there, and we just wanted to be a part of that.”